Rashid Khan-led Afghanistan on Monday stunned Bangladesh by 224 runs in the one-off Test at Chattogram to register their second win in Test cricket.
Afghanistan only gained Test status last year and had played just two Tests before this – losing to India in their maiden match and beat Ireland in its only other Tests.
Captain Rashid Khan led from the front for Afghanistan and bowled them to victory on the final day of the rain-affected match, which saw only 17.2 overs being bowled on Day 5 in which the visitors managed to grab the remaining four wickets to trigger joyous celebrations on the field.
The first session was completely wiped out by rain which and just 13 balls were possible after lunch as the rain returned to play spoilsport which meant that Afghanistan had only 18.3 overs to push for victory in the final session. Bangladesh were bowled out for 173 in 61.4 overs, while chasing an improbably target of 398 runs. 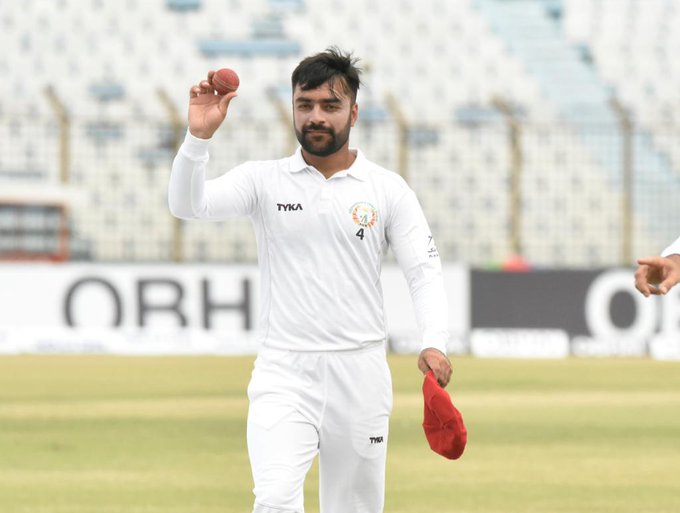 Test debutant Zahir Khan struck off the first ball of the day’s play by removing captain Shakib Al Hasan for 44 with Bangladesh reaching 143 for 6 in 46.3 overs at Tea.
Rashid Khan struck thrice in the final session, removing Mehidy Hasan Miraz, Taijul Islam and Soumya Sarka to complete his second five-wicket haul in the match and end with 6 for 49 in the second innings. He finished with match figures of 11 wickets for 104 runs.
Earlier, the fourth day had come to a premature end because of rain, which delayed the start and interrupted play several times. Left-arm spinner Zahir Khan took 2-36 and began Bangladesh’s slide with the wicket of opener Liton Das lbw for nine.
Mosaddek Hossain, promoted to No. 3 for Bangladesh in place of Mominul Haque, played an expensive cut shot against a turning delivery from Zahir and was caught for 12. Rashid baffled Mushfiqur (23) with a googly and added the wickets of Mominul Haque for 3 and Mahmudullah for 7 to run through Bangladesh’s middle order. Bangladesh lost 4-47 in that period.
Afghanistan had managed to post 342 in their first innings with Rahmat Shah top-scoring with 102 runs, the first from his country to score a Test hundred. He as ably supported by former captain Asghar Afghan, who made 92, while Rashid Khan (51) and Afsar Zazai (41) also making useful contributions.
Bangladesh were then bowled out for 205 with Rashid bagging 5 wickets for 55 runs while Mohammad Nabi, who will retire from the longest format after this game, picked 3 wickets.
Opener Ibrahim Zadran’s 87, along with Asghar Afghan’s half-century then saw the Afghans reaching 260 in their second innings which meant Bangladesh had to chase down 398 to win the match but failed miserably.

The best places of Bhutan waiting for you

Six places in Nepal you must see before you die.

The LG Okay42 with 4 cameras is coming to the market